Flooding Down in Texas 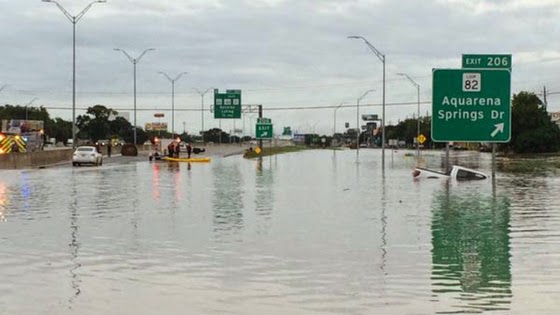 Due to the recent floods in the Texas Hill Country I realized the same thing happened on Memorial Day weekend back in 1981 when I lived in Austin.

May 24, 1981 began as a warm day where I lived in South Austin on Goodrich with my all time best roomie Jim Bob.  We were talking with our neighbor and friend Gary (Bob) and a visiting friend Sid and decided to head to Lake Travis and rent a sailboat for the day.

After boarding the boat with our provisions we set sail.  We hadn't gotten very far when we noticed the horizon darkening in the distance, and the wind was picking up.  I remember Jim and Gary yelling something like "Big Wind!"  Let's go.  All the while the boats participating in a regatta were heading back to dock??  More verbiage like "What's wrong with those wimps" etc. as we continued on.  That is until the golf ball sized hail started pelting us and the hard rain blurred our vision.  We all escaped below except for Captain Gary and his trusty mate Jim Bob.  But hail that size pelting them and no vision ahead we quickly rammed into the jetty.  oops.

We They got the boat docked and we got off to join a small crowd of people in the UFloat'm.  Yes that's what it was called.  There were UTotem markets (similar to 7 Eleven) so this was their version of a floating store.  Lucky for us it also had a small kitchenette that served cheeseburgers and beer because we weren't just there for lunch!  Lunch turned into dinner.  We spent something like 10 hours there, maybe more.  No way could we take the boat back to shore in all that rain, and rain, and more rain.  So we waited.

By the time we made it back to shore, very late at night (I think oneish in the morning) and drove back to Austin we were shocked.  Cars in the middle of Loop One and also a Grand Piano!  What?  The waters had started to recede a bit and we were seeing the aftermath.  The area of 6th and Lamar was completely flooded.  The piano had come from Strait Music across the street from the first ever Whole Foods Market.  The sign the next day read "Whole Floods Market thanks you for all your support we shall return".  And of course we know they did.

Unfortunately several lives were taken with that flood and the destruction was monumental to homes and families.

Now another flood has destroyed homes and business and taken lives.

Here's the start of the lyrics:

It's the price that you pay for living close to running water
You can move but you can't tell the river where to go
Try as you might it does no good to fight it
All you can learn is what the bank already knows
So silent and wise that it hardly even shows ...........................