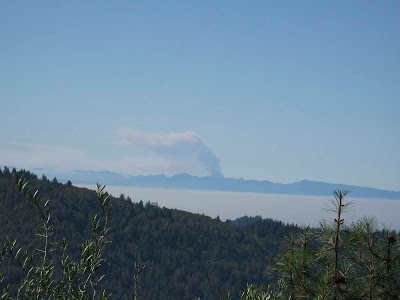 I just walked out my door and saw this plume of smoke across the Monterey Bay. I am thinking this is the Los Padres fire (aka as the Indians Fire). When that fire first broke out we could see this same smoke plume roiling up above the peaks. Then for days it was out of site. Did the winds change and now it's visible again, or did it spread back toward this way? For anyone interested check out the incidents posted at the CDF website.

We had a series of thunderstorms yesterday which started fires . It's rare that we have storms in summer and even rarer to have thunder and lightening. When I first moved to California from Austin where we had lots of electrical storms, my mother-in-law was at my house and there was this rumbling noise. She said "What's that", I said, "thunder". She "oh no, it doesn't thunder here". I thought what? It sounded again and definitely was thunder. I turned on the Tv and there was a bullentin being run across the bottom of the screen "warning, thunder and lightning" I thought "wow, this is a news flash?".

This fire is not close to where I live but it's a disturbing sign of the very early "fire season".
Posted by Lorri Scott at 10:03 AM

The whole fire thing terrifies me. I think you're very brave about the whole thing.