The one afternoon I got to walk I found this little bird feather on the path to the beach and later the coral hearts at Glass Beach.

I arrived in Kauai on Tuesday and spent Wed. with Connie. Thursday there were scattered showers and Friday I met Connie again at Mermaids for lunch after I had lomi lomi at Auntie Angeline's and then the rain started. During the night thunder was so strong it shook the condo and the rain fell sideways as the wind whipped it across the Island. Yesterday there were flash flood warnings and many roads were closed. I was forced to stay indoors which seemed ashamed since that isn't why I come to the island. I want to walk along the beach and hear the palm fronds cackle in the breeze. Alas it was raining too hard to go out and do that. I had a book I wanted to alter and some paints so I mostly glued and painted pages but my materials were limited and I got stuck with what to do next.

When I woke this morning at 5:00 (7:00 PST) I waited for the sun to rise. I went onto the lanai and took some photos of the moon peeking behind the palms. 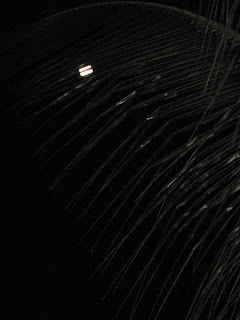 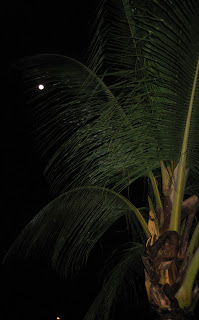 Then I checked my horoscope from the little drop down box and realized perhaps my eyesight is beginning to fail? It read:

'If someone is rude, try not to take it personally. You'll only create a big drama.'

Only I read "If someone is nude, try not to take it personally. You'll only create a big drama." Oh my.

When it was late enough to drive to Joe's on the Green for breakfast the sun was coming out and this is the reward we get for all that rain ............... 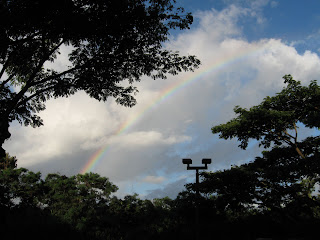 The sun is fading in and out of a very cloudy sky but I'm going to walk now while I can because the showers are expected to return.
Posted by Lorri Scott at 11:28 AM

Cool photo of the moon behind the palm fronds. I hope the weather clears and you get some beach time before you must leave.

I love the photos, especially the ones of the moon. I bet you had great times with Connie. I hope the rest of your weather is good.