Paris in my Future 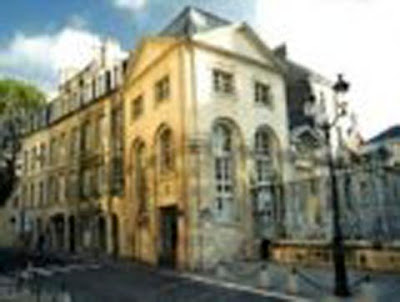 I have been presented with an unbelievably fabulous opportunity to possibly teach in Paris (as in France)!

Last Fall when I was visiting my friend Sharon Kilfoyle and working with her in her studio she said that the Paris American Academy of Fashion, where she has been teaching fabric dyeing and nuno felting, wanted her to take on more than the two classes she's already teaching and she didn't feel she wanted to dedicate that much of her time to be there. She wanted to be able to be home more or to travel back to Japan. She looked at me and said "Why don't you think about taking over one of my classes, we do such similar things". She said "At least come this summer and check it out". I was stunned. I'm pretty sure my mouth gaped open for a few seconds before I exclaimed "Moi?". So "tres chic" of me to answer in French but in reality that's about all the French I know. I never learned foreign language and no French. At least in Spanish I can ask where the party is, another beer please, and where is the bathroom. That's pretty much all you need to know right? As for the French language I know foie gras, champagne, the Louvre, and Jean Paul Gaultier. Maybe that's all I need of that language too huh?

The academy attracts students from all over the world. I'm planning my trip there to meet the director and observe the class the first weeks of September. Sharon says that's when the Mexican students come so "donde esta' el fiesta!" and instead of "fiesta aqui'" it's le parti est ici" (I looked that up).

I haven't spoken a lot of this trip because I don't think I'm going to believe it until I'm there. And there's always a chance this won't work out for me but what's the worst case scenario? I spent a couple of weeks in Paris with a dear friend. Not too bad huh?

Please read Sharon's story here
You can read more about the academy on Facebook.
Posted by Lorri Scott at 8:51 AM

This keeps getting more and more exciting! Thanks for also sharing Sharon's story via the article. I am sure that no matter what else happens in the future, you will be glad you are going this fall. After all, there are definitely worse things than being on foot in the Latin Quarter! I love that area as a base - we stayed there on a long, aka UK 'dirty weekend' several years back. I wouldn't hesitate to make that a base to explore Paris again.The inspiration from the city as well as the teaching will be different from anything else you are doing.

This is so cool!