The Road Home From Sedona and Songs 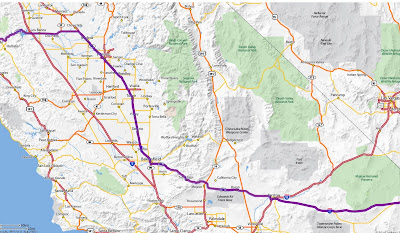 Leaving Sedona with Bakersfield as my destination to spend the night I was in awe of the scenery. Those pillars of weathered red rock, Bell Tower, and the Vortex make this a magical place. After leaving the hills I was driving through the desert landscape again. I would see nothing for miles and then pass small towns where I wondered what people who lived there did. You could see the green areas surrounding these towns where water must be but is it piped in from somewhere else or is there a deep well, an oasis if you will? I passed abandoned cafes and one bar I swear with nothing around it for miles called "The Honolulu Club". I wish I could have stopped to take a picture but I flew by before I could think to stop. Maybe that's why it didn't succeed, no one could stop in time. 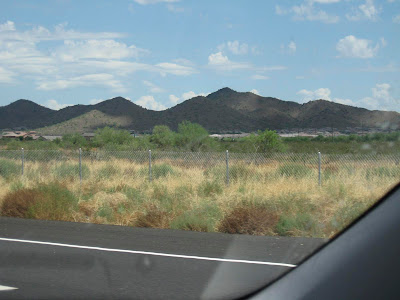 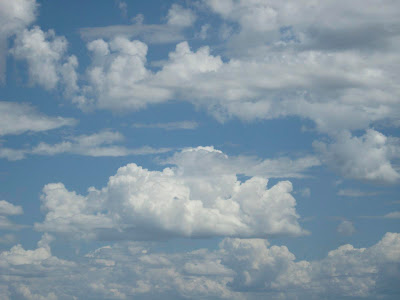 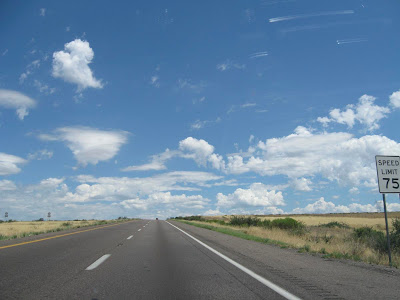 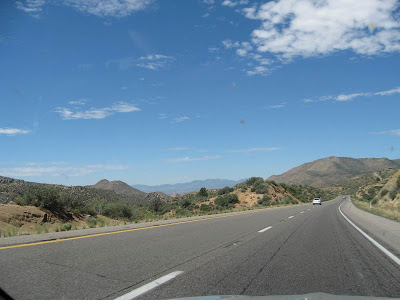 I thought of music again, songs that I play on the CD player as I drive along and often times sing with at the top of my lungs. I thought of the Native Americans who used to inhabit this land and I shoved the Indigo Girls "Rites of Passage" CD in and sing ..... " I used to search for reservations and native lands before I realized everywhere I stand there have been tribal feet running wild as fire some past life sister of my desire"..........

I come upon signs for Lake Havasu and then I see a sign saying "London Bridge" and an arrow. I'm driving and couldn't snap a shot but did get this one and put my own sign on. Hear this song to relate. Sort of. Well they mention London Bridge. 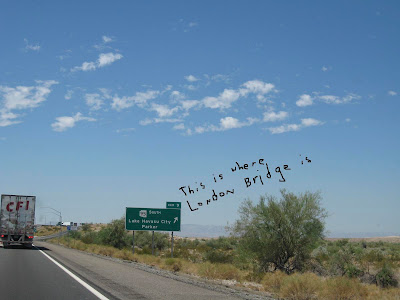 I was traveling on 40 West and saw signs for Flagstaff, Kingman, Barstow, San Bernadino ..... well of course 40 parallels Route 66.

As I crossed the state line of course we have to go through inspection stations, "where are you coming from" "Sedona" "do you have any fresh fruit or plants?" "No" "Okay have a nice day". But I was in a line I had to wait a while because there was an Olympic Racing Sailboat being towed in front of me with Massachusetts plates. They did a thorough inspections under the boat, around all the sides, etc. I wonder where that boat had been.

As I head farther north and west in California I start seeing corn fields and then the orchards, cherries, almonds, peaches, apricots. Closer to Gilroy I see some fields of flowers and roses. And then I'm almost home. 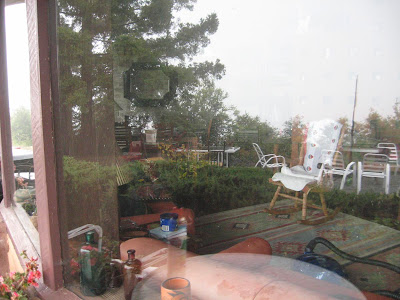 My journey is over and now I'm planning my next one which will be a long airplane ride to Paris.
Posted by Lorri Scott at 11:07 AM

I was so happy to get east of west Texas and into hills and grass and tree; I didn't know how much I love the midwest until its landscape appeared on the horizon. Bon Voyage for your trip to Paris!

Honey from the Bee said...

I almost felt like I was along for the ride! I'm going to have to do Rte 66 some day... in a convertible I think. Those skies!

Ah.. Paris! Can't wait to hear about it and the treasures you find.