New CD in the works

In 2006 my husband Michael and I had a CD produced of songs we wrote and sang. The band was Asylum's Way and you can still hear clips and purchase it at CD Baby. Michael has been working on a new CD of songs he wrote (except one of mine) and I am not participating on this one. I did however do the art design and layout for the cd. I had worked on it a bit before going to an Artful Journey but when I got home the deadline for me had been moved up so I diligently applied myself to get it finished. I had wanted to work in my studio but this took precedence so it will be next week before I get to create some more of the scarves with writing on them I learned in Lesley Riley's 3 day class. I'm am psyched to do this!!

This is a image of the cover of Michael's new CD which should be out April 1st. The photo is of the family farm in Wisconsin where are are planning to attend the 100 year anniversary in July. 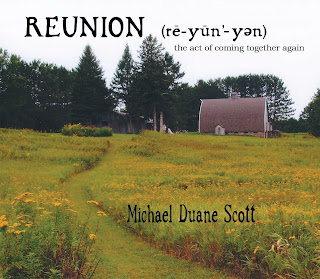