I had several replies about my headless angel and explored some solutions. Thinking of historical beheadings, of course Marie Antoinette came to mind. Marie Antoinette is perhaps best remembered for her legendary excesses and for her death: she was executed by guillotine at the height of the French Revolution in 1793 for the crime of treason. She has become one of the most famous Queens in history.

Then there was Mary Queen of Scots who was also the queen consort of France from 10 July 1559 to 5 December 1560. After a long period of custody in England, she was tried and beheaded for treason following her alleged involvement in three plots to assassinate Elizabeth I of England and place herself on the English throne.

And finally I fondly remember the story of Alice in Wonderland:

The Cheshire Cat is a fictional cat appearing in Lewis Carroll's Alice's Adventures in Wonderland. Alice first encounters it at the Duchess's house in her kitchen, and then later outside on the branches of a tree, where it appears and disappears at will, engaging Alice in amusing but sometimes vexing conversation. The cat sometimes raises philosophical points that annoy or baffle Alice. It does, however, appear to cheer her up when it turns up suddenly at the Queen of Hearts' croquet field, and when sentenced to death baffles everyone by making its body disappear, but its head remain visible, sparking a massive argument between the executioner and the King and Queen of Hearts about whether something that does not have a body can indeed be beheaded.

Alice and the Cards“Let the jury consider their verdict,” the King said, for about the twentieth time that day.
“No, no!” said the Queen. “Sentence first–verdict afterwards.”
“Stuff and nonsense!” said Alice loudly. “The idea of having the sentence first!”
“Hold your tongue!” said the Queen, turning purple.
“I won’t!” said Alice.
“Off with her head!” the Queen sounded at the top of her voice. Nobody moved.
“Who cares for you?” said Alice (she had grown to her full size by this time). “You’re nothing but a pack of cards!”
At this the whole pack rose up into the air, and came flying down upon her.


I took Joannes's idea of the angel holding out her hand for a head and I cculminated these stories and decided that Moo's head should be placed on the angel's hand. 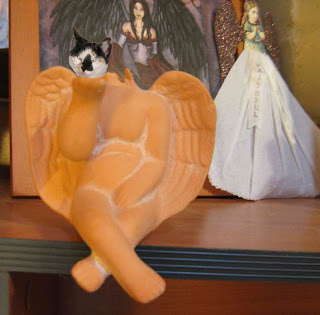 It's a great place for Moo's head!